“How can you expect me to remember anything when you are always asking me to forget everything?” a pretentious little voice asked.

“What are you talking about?” I questioned.

“You are always telling me, ‘Forget this ever happened, Brain. It’s for our own good’.”

“Well obviously I can’t remember,” my brain yelled back taking offense itself.

Maybe people with photographic memories have a better time accepting reality and don’t continuously write and rewrite their past like I do. (Never forgetting to highlight myself in the very best light.) Or maybe people with photographic memories are more in the moment. That way each task they do, their brain is paying attention to it, rather than, as my brain tends to do, running off barefoot like a feral child through a dense forest.

“Now you’re telling me to forget that we know that we are not smart enough to have a photographic memory.”

Put Your Pants on Hippocampus

Due to my unfortunate experiences with antidepressants as a teenager, I have a bit of an (un)natural distrust for the “good ideas” that my brain pushes on me.

Like millions of other teenagers, I was prescribed these little black-magic pills before it was “discovered” that antidepressants can actually increase suicidal thoughts and actions.

(“Eureka, Dr. Holmes! It seems that if you look at the empirical data that we deleted to get Prozac passed by the FDA, the suicide rate actually increases with use as compared to the placebo or even doing nothing at all.”  “My God, Dr. Watson! I’d say that means it’s time we start working on Abilify.”)

My brain, even antidepressant free, is sneaky, sneaky, always seeming to try to build up my trust for it. Of course you won’t forget the special place you put your passport. Or, I’ll remind you the parking break is on. Or, I’m sure caffeine won’t keep you up all night this time. My brain is like a badly run government agency trying to cover its tracks and reassure the public. The levies won’t break, people, the levies won’t break.

It’s a biological fact. The human brain never admits to mistakes. It’s why people with schizophrenia continually quit their medicine. Their brain tells them that they haven’t had any symptoms for weeks and they must be cured. But you need to take your medicine.

The brain’s stubbornness can also be seen in the paranoia associated with dementia. Even as the part of the brain that is thought to be involved in memory forming, the hippocampus, is eaten away by Alzheimer’s, it will never concede that it just may have forgotten something:

Hippocampus (roused from sleep): “Hmm?” Blinking and wiping his glasses. “Hmm, what was the question?”

Frontal Lobe: “WHERE is the toothbrush? You were supposed to transfer that to her long term memory yesterday.”

Hippocampus: “Well, yes I did do that, and it should be in the medicine cabinet.

Frontal Lobe: “It is not in the medicine cabinet. We already looked twice.”

Hippocampus: “Well if it is not there, then … it must have been stolen.”

Frontal Lobe: “STOLEN??? Who would want to steal a 95-year-old woman’s 10-year-old toothbrush?”

Frontal Lobe: “Fine. Fine. OK. Send it on to the nervous system. Red alert everybody. Queue the adrenaline. It has been stolen.”  Frontal lobe pauses, listening and then continues. “Amygdala is saying we should hide more stuff to prevent further stealing. Hippocampus, will you remember where the stuff is put?”

I think my hippocampus has a few holes in it also, because I have a horrible memory. But I thought I had finally accepted it: as much as my brain tells me I’ll remember, I won’t. So I have to write everything down. A few weeks ago I started keeping lists, using Google Calendar, doing things as soon as I think of them. I was taking my medicine, so to speak.

Then yesterday I was going to the store and my brain said, You don’t need to make a list, you haven’t forgotten anything in weeks.

And I hadn’t forgotten anything in weeks! I was so proud. I do have a good memory. See I told you.

So I went to the store without a list. I only needed two things from the store, and I came home with seven.

Then this morning my husband had to break up a fight between me and my brain as I was trying to strangle it to death because I realized I hadn’t gotten either of the things I needed.

So take your medicine. (Unless it is antidepressants and you are me as a teenager.) 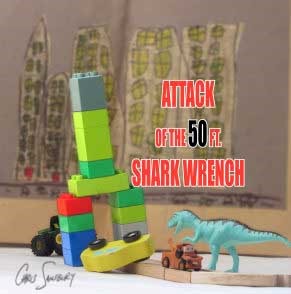 Attack of the 50ft. Shark Wrench

I live with a couple of little make-believe micromanagers.

I look at my boys, age 3 and 4, and I envision them in tiny cheap suits, hair slicked back, dark-rimmed glasses, checklist in hand.

“Now Mom you sit here and say, ‘Aahhh the bulldozer is going to get me.’”

“Mom, I TOLD you to laugh when I put this drill in your back.”

My eldest son’s favorite game these days is called boat crane. I am the boat crane and he is the engineer. The game consists of the engineer telling the boat crane where to put the boats. I lift specific couch pillows and then set them down in designated spots about two feet from where they were.

This is tediously boring. I try to make it more interesting, but my son is never amused by my ad-libbing. Sometimes the boat crane will have mechanical issues and need oil (coffee) to be fixed, or other times the boat crane slips and a bunch of boats all fall onto the engineer’s head.

“NO MOM! You’re doing it wrong. Now pick up those boats.”

I’m sure part of the fun of make-believe is being able to boss your un-fun mother around, being able to have the roles reversed for awhile, but I feel like I am working with an ego-maniacal writer/actor/director who won’t let me bring anything to the table. I gotta make this boat crane my own, man.

I tried explaining to my boys that the first rule of improv is to always say yes to what your improv partner is bringing to the scene. We will be in the middle of a school of sharks (played by Legos) and I will pick up a certain shark and wrestle it, when one of my kids will say, “No, Mom. That’s not a shark. That’s a wrench.”

“Aghhhhh. I quit. This is no fun.  I’m going to go wash dishes,” I pout and kick the stupid shark-wrench.

Why can’t I just go with it?

As soon as I pass, they race up behind me, singing, “You can’t pass me!” And always, always, without fail in the chaos of two trikes, a pulling dog and me, one of them will accidentally slam their pedals into the back of my ankles.

I have anxiety the whole walk about all the skin getting torn off my heels. I try to keep them in front of me at all times like they are two drunk drivers. I jump into the grass anytime they get near.

“KEEP MOVING!”  I scream now anytime they stop and try to get me to pass.

No fun task goes unpunished. Want to make bath time fun one night, as a special treat? Blow bubbles for them while they bathe and then plan on being harassed to do it again every night for the next five years!

Or want to make getting dressed fun by putting their pants on your head? “Oh, look how funny mommy is with your pants on her head.” Then for the next 12 months every time you turn your back your youngest is naked again and trying to sneak his pants onto your head.

I know I should. I should enjoy this time with them when they still want to be with me and play with me. I should relish that they are enjoying the simple things in life.

But I just want to get it done!

Why? Where am I going so fast? Race, race, race so they can go to bed and I can have my wine? (YES!)

I wanted to do this, be with them, raise them. It was important to me. I don’t want to think I spent this precious time telling them to hurry up and get moving.

Do they micromanaging in play because that is what it feels like to be my kid: tediously boring and no fun?

Maybe I need to back off a little and let them do things the way they want to. Let them make the chore their own.

Mother’s Death Caused by Spice of Life will get you laughing over the things you usually cry about in this delightfully hilarious essay collection on marriage and parenting. Discover the real cause of mommy brain, how to deal with those embarrassing genetic flaws you passed down to your offspring, and why your parenting choices are always right, all while laughing so hard tears will fall wildly into your wine, err… water glass.